Dr. Robert Murray, a professor in the Department of Pediatrics at the Ohio State University School of Medicine, kicked off the last day of the VAND annual meeting on April 12, 2016 in Fairfax, VA. He presented an engaging talk on epigenetics and the importance of nutrition in early childhood development. He opened his talk by discussing the Carolina Abecedarian Study, a study conducted in North Carolina in 1977 to study the benefits of early childhood education for impoverished children. Two groups of children were randomized to receive either quality preschool education, or the healthcare and education available to them by the government. The intervention, or quality preschool group, was provided with 8 hours of child care daily from birth to 5 years of age, health care, nutrition provisions including 2 meals and one snack, and cognitive and social stimulation. Children in the control group were set up with Medicaid, WIC, food stamps, and did not receive child care.

Their findings from this study were ground-breaking and have set the stage for public health interventions: as adolescents, children in the intervention group were less likely to fail or repeat a grade, 4x more likely to graduate from college, 4.4x more likely to hold a skilled job, had stronger social and emotional skills, were more physically active, drank less alcohol and had fewer run-ins with the law when compared to the control group. At age 40, these same children had much lower blood pressure, lower blood cholesterol, less obesity, lower type 2 diabetes risk and much lower heart disease risk than the children in the control group. Dr. Murray discussed this great impact from early childhood interventions focused on emotional, social and cognitive stimulation, as well as proper health care and nutrition, on neurological (brain) development and future health outcomes.

From there, Dr. Murray went on to discuss the role epigenetics have to play on future health and well-being. Epigenetics is the study of modified gene expression; in other words, the people we become is not entirely dictated by our DNA. Environmental factors humans are exposed to throughout their lives can change how their genes are expressed, despite not changing the genes themselves — changing how our body works and how we behave, ultimately altering who we become. A mother’s diet is a “powerful epigenetic force” during fetal growth and development. How a mother eats during pregnancy, independent of genetics, can impact how that infant’s genes are expressed, in addition to affecting overall adequacy of growth and proper development. He noted some of the common nutritional intake issues associated with many women of child-bearing age today, including high saturated fat and sodium intake, low fiber, vitamin E, calcium, magnesium and potassium intake with inadequate intake of other essential vitamins and minerals, and common deficiencies in iron and vitamin D. Mom’s nutrition status entering pregnancy influences her growing fetus, and maternal and child nutrition continue to play a vital role in the postnatal period, particularly regarding brain development in the first two years of a child’s life.

In the first year of life, a baby’s brain will double in size, and by the third year of life its size has tripled. During this time, the brain is forming 700 synaptic (communication) connections per second as the baby continues to explore and analyze every last detail of its seemingly simple life. If synapses are formed but not used regularly, they are forever lost, which is another reason cognitive and social stimulation is so important in a child’s first years. In addition, diet quality and stable health were two of four necessary things Dr. Murray highlighted to optimize brain development (social and emotional support as well as sensory-motor exploration were the remaining two contributors). Stress, a reaction controlled by the “middle brain”, is also a contributor to overall neurological development. Though brief stress can be a good thing, prolonged stress can be detrimental to a child’s overall development, potentially leading to disease, disability, social and emotional issues, and even early death. Since adequate nutrition and intake of vitamins and minerals fuel proper brain development and positively impact overall health, prolonged hunger and inadequate nutrient intake are both considered prolonged stressors on the body that can result in adverse outcomes. 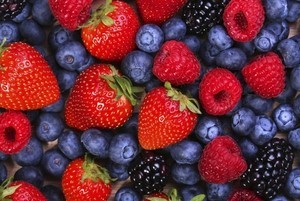 According to Dr. Murray, research has confirmed that diet quality and regular activity make people healthier, regardless of size, age, or risk factors. This includes risk of heart disease, diabetes, stroke, obesity, hypertension, cancer, and other chronic diseases. The Dietary Guidelines for Americans can help adults establish a healthy eating plan that works for them. With the new recommendations for 2015-2020, Americans are especially encouraged to limit sodium, saturated fat and added sugar intake, while making sure to get enough calcium, vitamin D, iron and fiber in their diet by focusing on eating whole foods from the five food groups (whole grains, fruits, vegetables, protein and dairy). It is in part due to the most recent dietary guidelines that people started to analyze the impact of too much dietary sugar on the body, and how to reduce added sugar consumption.

When we think about a child’s diet, certain foods such as flavored yogurt, flavored milks, sugar-sweetened cereals and fruit juice may come to mind as a few of the major contributors to a child’s added sugar intake. Dr. Murray pointed out that, though these foods and drinks certainly contribute to overall added sugar intake, the largest contributors by far are sugar-sweetened beverages (not milk or 100% fruit juice) and sugary snacks, thus the focus should be on limiting these. This applies to adults as well; Dr. Murray stated health will never be the number one reason people choose to eat certain foods – taste, value and convenience are the current reigning champions. He noted a French study discovered substituting better food choices within the same food category (i.e. white vs. brown rice, carrot cake vs. chocolate cake, etc.) improved long-term dietary patterns better than simply consuming lower fat versions of the same foods.

Dr. Murray concluded his presentation by restating the power of nutrition in epigenetics, how hunger can be a persistent and sometimes toxic stressor, the constant nutrient requirements of the brain, particularly during early life development, and how breakfast and snacks are our best bet at improving the dietary intake of children and adolescents. 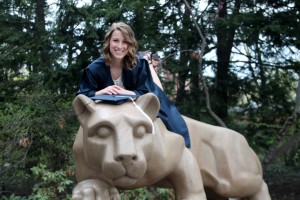 Monica Hershey is currently a dietetic intern at the University of Virginia Health System in Charlottesville, VA. A Pennsylvania native, Monica earned her undergraduate degree in nutritional sciences at Penn State University. Upon graduation, Monica would like to work as a clinical RD at a large medical facility on the East Coast, with hopes of working as a renal dietitian in the near future. Her personal interests include hiking with friends, recipe-less cooking and exploring all the fun that Charlottesville has to offer!